Housing sales have been in a two-month slump, with February marking a seven-year low. Spring is looking far brighter, with month-over-month sales rising 3.5% to April from March.

Even with the gains, however, activity is still far lower than the market’s peak, and 40% of markets were either stable or in decline, including Vancouver. In contrast, Toronto is responsible for over half the increase in transactions.

“Sales activity is stabilizing among Canada’s five most active urban housing markets,” said Gregory Klump, CREA’s Chief Economist. “That list no longer includes Greater Vancouver, which fell out of the top-five for the first time since the recession and is well into buyers’ market territory.”

Prices barely budged, rising less than 1% year-over-year. The national average property price stands at $495,000, or $391,000 once you remove Toronto and Vancouver.

Benchmark prices are also stable, according to the Aggregate Composite MLS Home Price Index, which tracks 18 markets and is considered a more accurate reflection of price trends for the “typical” property.

Cities in Ontario are doing better than in British Columbia, with benchmark prices in Vancouver down 8.5% year-over-year, the Fraser Valley down 4.5% and Victoria up less than 1%. Meanwhile, Toronto is up over 3%, the Niagara Region 6%, and Ottawa is up almost 8%.

Klump cites the reason for British Columbia’s decline as “a cocktail of housing affordability challenges, reduced access to financing due to the mortgage stress test and housing policy changes implemented by British Columbia’s provincial government.”

The Prairies continue to suffer from an excess of inventory and low oil prices, which have led to benchmark prices dropping 4.5% in Calgary, 4% in Edmonton and 4.5% in Regina.

“Housing market trends are improving in some places and not so much in others,” said Jason Stephen, CREA’s President. “All real estate is local.”

For more data on this month’s housing market check out the infographic below: 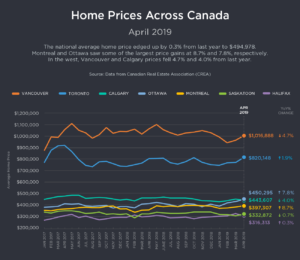 What Our Customers Are Saying About Us!

by Saleem Raza on Majestic Mortgage

This was our third property purchase and we have been using Harry’s expertise on all occasions with our mortgage needs. We have found Harry very professional, very thorough and when needed very discreet. He was able to put in action a plan that enabled us to improve our situation. He is non-judgmental and is able to make you feel comfortable and confident. He was very accurate with his paperwork and most importantly he did what he promised at all times.

by Wendy Simpson on Majestic Mortgage

by Jeannete on Majestic Mortgage

Harry is outstanding. He was responsive to our needs, he worked hard & fast on a time-crunch! We live in Shelburne and getting the paperwork to them and having to deal with the over the phone was extremely easy and he even came to a place of our convenience to get the paperwork signed. He got us an excellent rate and we are very pleased. If you are looking for someone to help with your mortgage he is your guy!

by Janice on Majestic Mortgage

I am very pleased to write this note in appreciation of what Harry did for me recently. He struck me as a professional who is very knowledgeable ​and very resourceful. He was very helpful right from the time of our initial contact. I was having difficulty getting a mortgage due to my bruised credit but he reassured me that there is always a way. He’s very warm and friendly and this combined with his professionalism made me very comfortable and less anxious. The mortgage was approved without any difficulty or obstacles. During the process, he was always there, available 24/7 for any questions. Harry is a one-stop shop for anyone shopping for a mortgage.

by Humera Siddiqui on Majestic Mortgage

Harry’s expertise, professionalism and exceptional customer service made my refinancing process timely and efficient. I had a fairly new job and had a challenging credit, Harry consistently provided me great advice on how I can bring up my score. Even after all this he made the deal happen with an A lender! I believe anyone who uses his services will quickly see the value he provides to his customers.